Living within planetary boundaries – how cities can save the earth 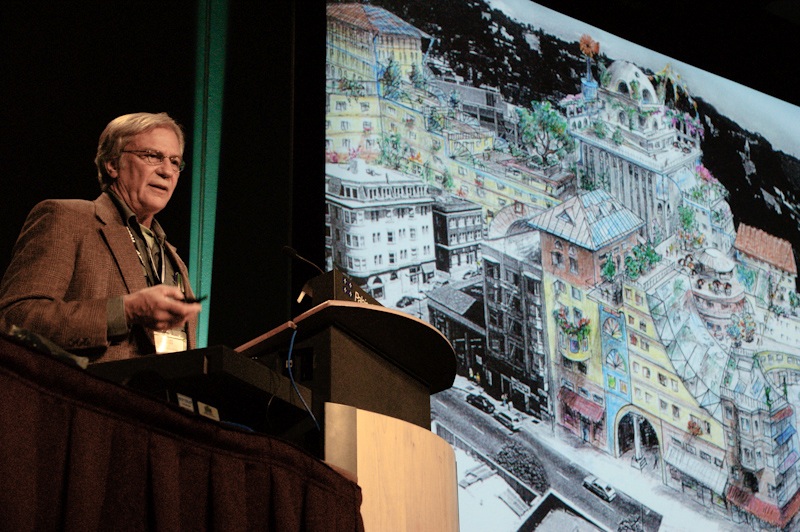 At the Ecocity 9 international conference in Montreal, Kirstin Miller organized a panel of short presentations by members of our international team drafting the IEFS. She described the history of the project and progress that has brought us to a point where we now have a solid set of core authors and supporting advisors, including Bill McKibben, author and major leader in climate change education and policy action; Mathis Wackernagle, co-author of the ecological foot print concept and President of the Global Footprint Network; Warren Karlenzig, President, Common Current, a global urban sustainability policy consulting company; Rusong Wang of the Chinese Academy of Sciences, Member of the Chinese People’s Congress and Ecocity 5 Convener; Peter Gleick, President of the Pacific Institute, a water policy think tank; Ian Douglas President of the International Council on Ecopolis Development and President of the Society of Human Ecology, and other expert advisors.

Kirstin Miller laid out the initiatives strategy for involving Early Partner Cities, of which several are on board. These Early Partner Cities, including Vancouver and Montreal, Canada, Curitiba, Brazil and Kirtipur, Nepal, have commitments to gather performance data about their own conditions and help refine the strategy to develop a framework and set of standards by which many different kinds of cities in very different circumstances of size, wealth, geography and culture could be assessed and assisted in the journey toward their role in an ecologically healthy, socially just urban world in the future. Other potential early partners include Pafos, Cypress; Durban, South Africa and Dakar, Senegal.

Several of those in our core committee drafting the IEFS took the stage after Kirstin’s introduction in Montreal. 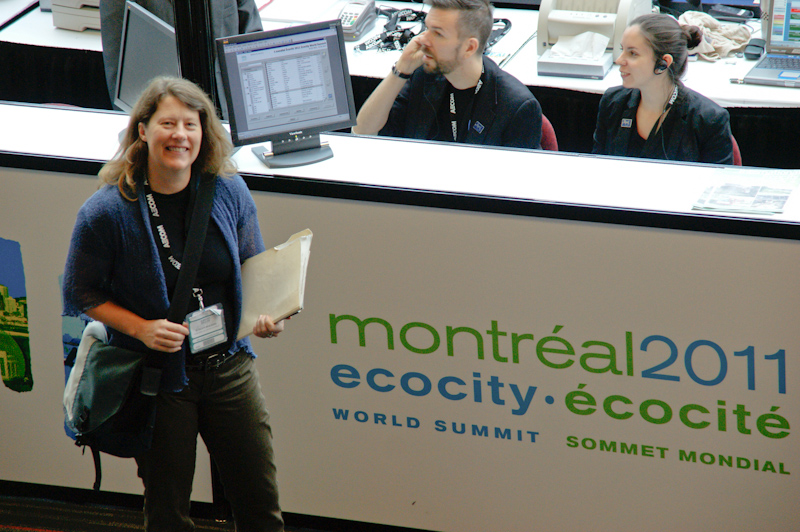 Marco Vangelisti, artist and financial strategist and investment consultant working on the IEFS with Ecocity Builders out of his hometown of Berkeley, California, further elaborated the Early Partner Cities program and what it hopes to accomplish. As one of our delegation to Nepal last fall he was important in developing the connection with the ancient more than 95% car free town of Kirtipur built on a rock outcrop that rises from the Kathmandu valley looking all the way up the Himalaya range from Ganesh Himal (24,350 feet) to Mt Everest (29,029 feet). Rick Smith, professor at Wayne State University, reported on his survey of various sets of standards from the US Green Building Council’s LEED (Leadership in Energy and Environmental Design) to ICLEI’s STAR Community Sustainability Index that have been designed to measure building energy consumption, city contribution to green house gas reduction and so on. Our idea was to go beyond the existing standards and measures to provide a tool for transforming cities more thoroughly and more rapidly than we are currently seeing.

Bill Rees of the University of British Columbia (UBC), co-author of the ecological footprint concept with Dr. Mathis Wackernagle and a part of our team of IEFS co-authors, and Jennie Moore, Director for Sustainability at the British Columbia Institute of Technology in Vancouver also spoke. Jennie, working on her doctorate under Bill at UBC, spoke of applying the ecological footprint approach to the ecocity framework and standards to reveal the realities of high consumption that claims to be green – not often true. To have a prosperous life in healthy future our ecological footprint, the impact each of us have on society’s resource base and on other life forms of the planet has to be factored in in relation to our lives in cities. Bill and Jennie report that present scholars and researchers working with ecological footprint figures for individuals and aggregated national total impacts have yet to gather and assess data for cities. Thus best figures in terms of total impacts that could help us guide ecocity design and development are not as readily available as they should be. To gather and access this information, then, becomes one of the most important missions of the IEFS. Ernest Callenbach, who also wrote the underground classic “Ecotopia” about an ecologically tuned, even fanatically healthy country on the Pacific Coast – Northern California, Oregon and Washington – that secedes from the United States and goes its way building what looks suspiciously like ecocities and restored bioregions, wrote another book called “Living Poor with Style.”

The goal of ecological cities might turn out to be understanding how to really prosper, both people and nature, at low consumption levels according to ecological footprint assessments of the cities and towns we live in… in style. Cliché green – big houses with solar heated swimming pools and all-around double glazed panoramic windows for example, with low per-person benefit (few people enjoying whatever sort of prosperity that suggests) – could count against its city’s ecocity ecological footprint in a very different way of assessing “quality of life” and “standard of living” which tends to claim high points for high consumption activities, facilities and habits.

Ray Tomalty, professor at McGill School of Urban Planning, further elaborated on our process and spoke about the “step-wise process” by which cities could be assessed or assess themselves for their position on the road to high ecocity levels of accomplishment. In that session I spoke about an “ecocity toolbox” that could be used to help move cities in an ecocity direction, in theory building from basic principles and land use patterns up, adding particular policies, technologies and practices to attain highest possible ecocity functioning. In particular, to get to the condition of easy access by proximity, we can use the concept of developing vitality centers in our metropolitan areas and by utilizing Ecocity Builder’s tool we call the Ecocity Mapping System, a future-oriented, whole-systems design approach to mapping a city to help guide transition to lively compact, functionally diverse centers with restoration of natural areas and waterways and agricultural landscapes returning to areas now paved over in asphalt, concrete, lawns, tar and gravel and asphaltic shingle roofs and submerged in air pollution with increasing CO2 content.