Living within planetary boundaries – how cities can save the earth

Excerpted from the October 2011 editorial of Ecocities Emerging, the newsletter of Ecocity Builders and the International Ecocity Conference Series

“Why are we here?” It’s a question often posed philosophically. Posed practically, the answer is pretty straightforward – we’re here because our planet supports conditions for life, including human life. Alarmingly, humans are now impacting living systems to a point where our life-sustaining conditions are being undermined. The deeper and more urgent question at this point is: “How do we stop doing this — and what can we do to support and sustain both people and planet?”

We know that the answer to this question must be framed within the limits of what the planet can provide while maintaining stable life supporting conditions. Scientists at the Stockholm Resilience Centre have outlined nine planetary boundaries as comprising a “safe operating space” for humanity. Drawing upon current scientific understanding, quantifications have been proposed for seven of them:

The two additional planetary boundaries for which thresholds have not been yet established are: 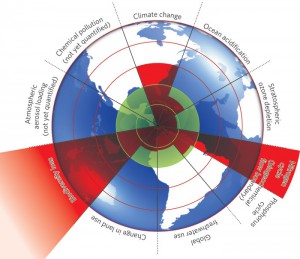 We have already transgressed 3 planetary boundaries: climate change, rate of biodiversity loss, and changes to the global nitrogen cycle. We are in a critical predicament. The question remains unanswered. Can humanity – cities and citizens – exist, even thrive, within the boundaries? We believe that we can. Cities, we believe, can save the earth.

And cities already have helped save the earth once before. When it was discovered in the mid 1980s that there was a ozone hole in the atmosphere (conditions causing the stratospheric ozone layer to become very thin) creating dangerous and unhealthy biological consequences, cities in the United States came together to ban the CFCs that were causing the problem as outlined in the Montreal Protocol, even though then President Bush and his administration were refusing to include language in the Clean Air Act to put the Montreal Protocol into effect. But cities took action anyway. Their efforts got the attention of the United Nations and the world and led to the formation of ICLEI, Local Governments for Sustainability, an organization that went on to further assist cities in taking local action on global issues through the adoption of local Agenda 21 plans, Climate Action Plans and other initiatives. More on ICLEI’s story in next month’s newsletter.

A planetary boundary that was threatened (stratospheric ozone) was restored. This is a significant accomplishment that is not talked about very often, but it should be. The Montreal Protocol embodies the principle agreed at the United Nations Conference on Environment and Development in 1992 that “countries have a common but differentiated responsibility to protect and manage the global commons.”

We can live within our planetary common boundaries, but only when we know what this kind of living looks like and how it is applied. Once we know that, we can then finally accurately define “the green economy” (one of the major themes of the upcoming UN Earth Summit), and know how to best invest in humanity’s healthy future with fairness and equity. Ecocity Builders and our international associates and advisors are currently sharing work to date on defining conditions and an approach for living and thriving within the planet’s safe operating boundaries, now and into the long-term future. The International Ecocity Framework and Standards initiative is bringing together cities, citizens, academics, scientists, business, government and NGOs around a shared vision of sustainable development – a way to successfully live within this safe operating space. (The IEFS’s 15 basic conditions for sustainable development are listed here.)

Cities can save the world.

As we build, so shall we live.